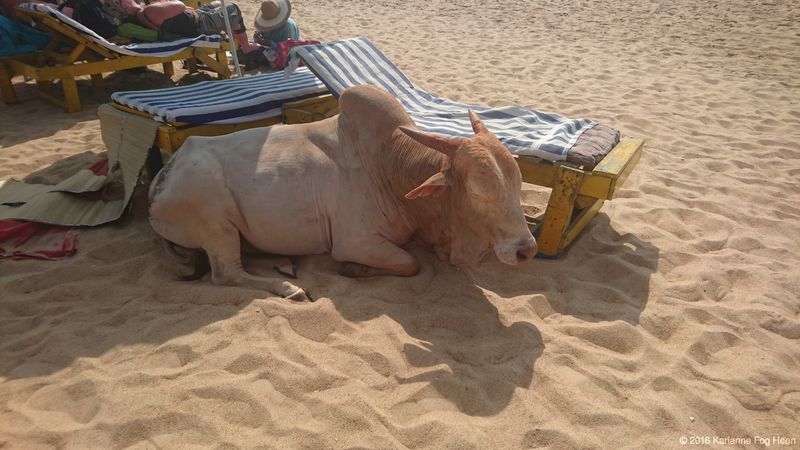 One thing I realise time and time again is that no matter how much you read and prepare for a new country, you will never understand it before you get there. I read the guidebooks, reviews, and spent quite a lot of time on travel forums, particularly the TripAdvisor forum for Goa, reading up and preparing for my two week winter holiday in Goa, India.

Why India, why Goa? January is the worst month for me healthwise, my body gets stiff and I have pains in my muscles and joints because of the cold. So we try to go somewhere warm for a couple of weeks for me to warm up and relax. So, to get warm enough in January, it's around Equator, and mostly far away. As an additional challenge I don't take the change of time zones very well. Compared to Thailand's six hours difference to Norway India has only four and a half, and I realised it makes a difference! Because of work travelling for Tollef it was most practical for me to go alone this year, so I booked a package with Apollo, being easier to have the access to a Scandinacian-speaking guide for any questions.

The trip there, with a stop in Doha on the way, went very well. The airline (Quatar) wasn't as good as I remembered it, but it was comfortable enough, and I managed to sleep most of the way. Arriving in Goa, and after an hours bus trip, I checked in at the Ocean Palms hotel. I didn't get a room with a balcony as was booked, but the room was so nice I didn't bother to change. The roof was very high, with both a fan and air condition, making it very comfortable and easy to have a nice temperature inside.

The first couple of days I used to recover from the trip and get used to the new environment. Quite early on I decided that India was nice and warm, and comfortable enough, but not really my kind of place. Thailand is a lot more developed and comfortable when it comes to hotels, restaurants etc. I was surprised to see the contrasts among the local people, from wealthy Indians on holiday to the poor apparently homeless people along the streets with hungry, half naked children. The dust, as promised by guidebooks and other travellers, got everywhere, my feet were never really clean during the two weeks there.

I stayed in the outskirts of Calangute, one of the more busy northern beaches. Luckily my area was quieter than the central Calangute, and the beach not too crowded. I felt safe enough, and enough eating places and shops nearby to explore a bit. I loved walking along the beach, just feeling the sand and watching the cows, people and the ocean. And the dogs, of course. As a dog-person, it is always interesting to see the street dogs of a foreign country, watching their interaction and language and comparing to our housebound dogs at home. Most of the dogs in Goa seemed relatively well cared for though, many had collars and probably somewhere to go home to.

The fourth day I went on an excursion, seeing the churces in Old Goa, trying to get a glimpse of crocodiles in the flood (we saw a tail), and visiting a spice plantation. It was nice to get around a bit, even if not very exciting. Driving around the countryside also gave me second thoughts about other excursions I had considered, as it was quite tiresome. The day after I relaxed by the pool the whole day, and had a spa treatment at the hotel. It was nice apart from the building noises from the outside, which was not very relaxing.

The turnaround came on the fifth day. I went by bus to the flea market in Anjuna. Even though I had to change buses twice it was a very nice trip, and at some point I suddenly felt much better about the whole place. I walked around the market for a bit, bought some tea and a shawl, and had a nice lunch before taking the boat back to Baga. From Baga I walked along the beach to Calangute, and got the bus back from there. There were so many people on the northern part of the beaches, and mostly Indians.

Originally I had planned to make a three day trip to the historical Hampi, but decided against it when I realised the trip there would be very tiresome. So most of the two weeks were spent relaxing by the pool and a few walks on the beach. One day I tried the traditional Ayurveda spa treatment. After three hours of being oiled, massaged and steambathed I felt ready to be served!

The last Saturday night I went to the Saturday Night Market known as Ingos. It was quite large, and even if it was mostly the same stalls as everywhere else it was a nice atmosphere. I bought some souvenirs and gifts, being very satisfied with my haggling and paying about one third of the first asking price. I got a bunch of different spices, and kaftans for my mother and sister. And one of the cotton backpacks for myself to carry the shopping in.

The next day I spent the whole day at the beach. It was a bit cloudy, and a slow wind, so it didn't get too warm. Unfortunately I also didn't notice that I was getting burned, after almost two weeks managing not to. It wasn't very bad, but bad enough that I slept without a cover that night, and got a cold for it.

Also the last couple of days the weather was disappointingly clouded and almost chilly. For Goa, at least. On Monday I walked along the beach to the Calangute market and did some last minute shopping, and walked back along the road, dropping by a couple of places I'd seen from the bus. On Tuesday, despite the clouds, I stubbornly enjoyed my last day in India by the pool.

The trip back went smoothly, and even though I spent a couple of days with a bad cold when I came home, I definitely felt more rested. Contrary to how I felt the first few days I know I definitely will go back, hopefully with company the next time.